I love that question. Having a piece of clothing so well made that it’s lasted 20, 30, 40 years or more is a great feeling. In the world of uniqlo, H+M, and disposable fashion, it is very cool to have clothing that stands the test of time.  Even better, the piece is usually unique, and the chances of you encountering another in your travels are slim.

Not only that, but often these pieces carry weight. They’re old, and have stories about how they got to you. If you’re lucky enough to have a piece inherited or gifted from a relative, then you know the story.

The whole idea of vintage flows from the idea I was talking about yesterday, about channelling an archetype, or style icon. The vintage pieces can either anchor a modern outfit with a bit of classic stylings, or serve as the inspiration for a complete vintage style outfit.

Last night, I saw Leon Bridges at the Bowery Ballroom in NYC.

I can’t think of anyone who more embodies vintage style right now. His Instagram (@leonbridgesofficial) is full of his supremely cool early 1960’s style. Not only is that his style aesthetically, but musically as well. He’s been described as the second coming of Sam Cooke, and his album could have just as easily been released in 1962 as 2015. It’s called Coming Home, and you can listen to most of it on his youtube channel.

His style mirroring his music speaks directly to the point I have been trying to emphasize. A man’s style is a reflection of himself. It should not just express confidence, but some other intrinsic quality about him. Style can be like a time machine, or a channel to the past. Or it can evoke the archetypes I talked about yesterday, or an icon. Style is more than just looking good. It’s about communicating something to the rest of the world. Whether it is simply that you care about your appearance, that you are dedicated to a certain period in time, or a certain type of lifestyle. I think there’s an enjoyment and power to that. Leon Bridges looks and sounds like he’s straight from the early 1960’s.

Last night was no exception. He was wearing a brown glen plaid blazer and olive slacks, with a super skinny tie that had both a tie pin and clip. Which actually worked. Someone yelled: “We love your outfit!” (It wasn’t me).

The show was great, the highlight for me being a cover of Lauryn Hill’s “Ex Factor.” It certainly inspired me from a style perspective. Vintage is, by definition, nothing new. But seeing it done well is always an inspiration.

For today, I’m doing a two point puff fold. (With, of course, a vintage pocket square).

1. Start with your square. I like to have one with a pattern and different edges to give some nice contrast to the fold. 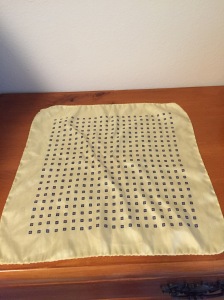 2. Hang it from approximately the middle of the square.

3. Draw the fabric through your circled hand, so as to make a puff at the top. 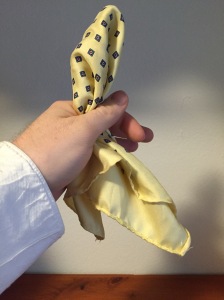 4. Pull up one corner of the fabric and tuck into your closed hand holding the square together. 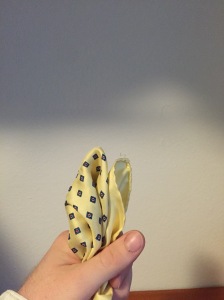 5. Pull up the side of the square that is directly opposite from the corner that you pulled up to make the first point.

6. fold the remaining corners up to “lock in” the fold. Try to arrange the points so that they’re behind the puff.

7. Insert into pocket and arrange. Again try to keep the points behind the puff. It looks better that way.

Hope you enjoyed today’s fold and article. Any questions? Seamus@smkstyle.com