There was a guy walking today through a park in Stamford. Full black wool suit and white new balance sneakers. From a style perspective, it was a fairly unmitigated disaster. You can wear black suits to work, but I definitely wouldn’t in the middle of the summer, on one of the hottest days of the year. And the new balance sneakers are unbecoming to anyone who didn’t build a successful company, make millions, get kicked out of said company, then come back and make it one of the largest companies in the world through sheer force of will and wearing the same outfit everyday . Or someone who is running.

As easy as it is, the struggle is to not look at this guy with derision, like I did, but instead with understanding. Maybe he just doesn’t care, he’s given up. Which, honestly, is too bad for him because dress shoes are becoming more and more comfortable. The other reality is, homeboy has got some stuff going on. Maybe his wife kicked him out and he only has his black suit. Maybe he is on his way to a funeral. Maybe he’s got some messed up feet and has to wear new balances. I don’t know.

I know what you’re going to say: “but you just shat all over everyone who wears cargo shorts.” And you’re right, I did. I also have been telling my girlfriends they’re not wearing pants when they go out in public with leggings on, but that’s me. And I get it, they’re comfortable and practicable. But, unless you’re working, hiking, getting dirty, or sneaking in snacks, cargo shorts look not great. You can wear them, but you probably shouldn’t. If you decide to fine, but you would most likely look better in other shorts, or pants. I promise. And that’s the whole point. Style is about you looking good, and being able to express yourself. Look, if you feel like channeling Steve Erwin on crocodile hunter, good on you. If that’s your thing, do it. But, it doesn’t matter if you wear cargo shorts to your job because they can carry your paintbrush, when you go out to meet your friends, or on the weekend, that doesn’t mean you have to wear the same thing.

What I’m really trying to get at is this: dressing well doesn’t make you any better than anyone else, and having more knowledge about it doesn’t either. But you know what’s nice? Being the guy in the wedding party who can tie everyone’s bowtie because the bride insisted on no-clip ons. Or being able to go with your friend to help him navigate the maze of buying his first suit. Or having someone ask where they can find a good tie, or a nice dress shirt for cheap.

The point of knowledge is to share it, and I hope I’ve successfully conveyed some of the things I’ve learned in the past month or so with all these pocket square folds. I can confidently say, that this website now has the most comprehensive gathering of ways to fold pocket squares on the internet. Compilation to follow. Those of you that have stuck with me thank you. I hope to continue on, and have a few more ideas. I know the posting has become more sparse, but I have a few other things I’m working on in addition to writing. I hope to have an announcement about one of them in the next couple weeks, so stay tuned. And if you haven’t already go like my facebook page.

Today’s fold is another one I’ve made up out of whole cloth. I’ve been tempted to name it after myself, but, unlike some presidential candidate, I can restrain my ego long enough to dismiss that thought.

Today’s fold pretty much requires a cotton square, as it holds the shape much better. 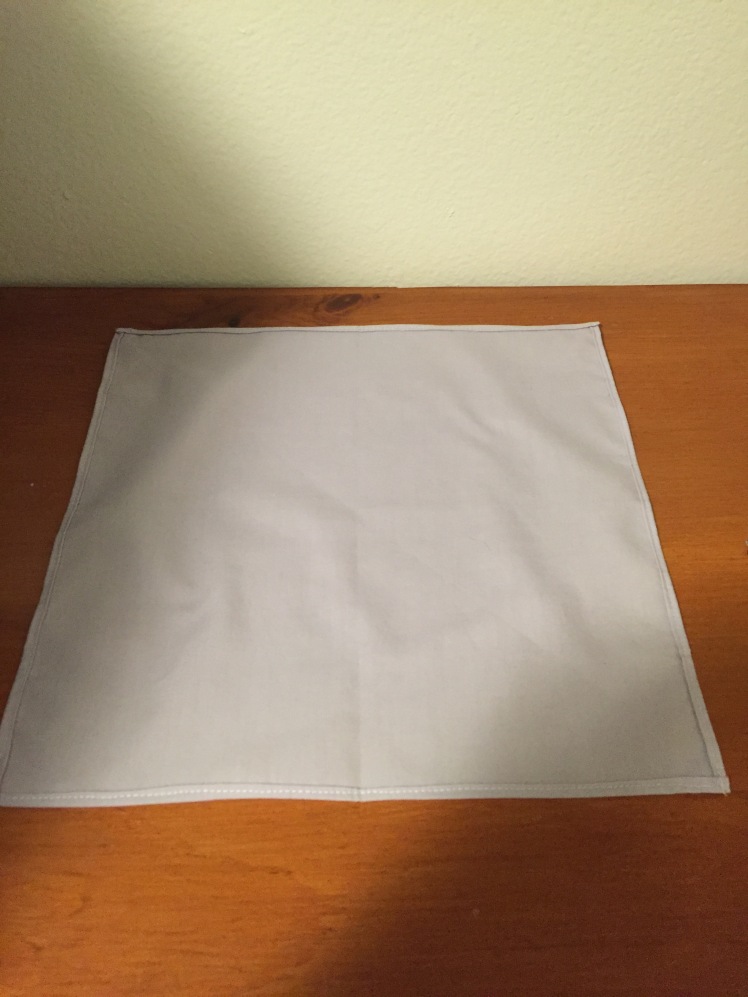 3. Fold in half diagonally again. 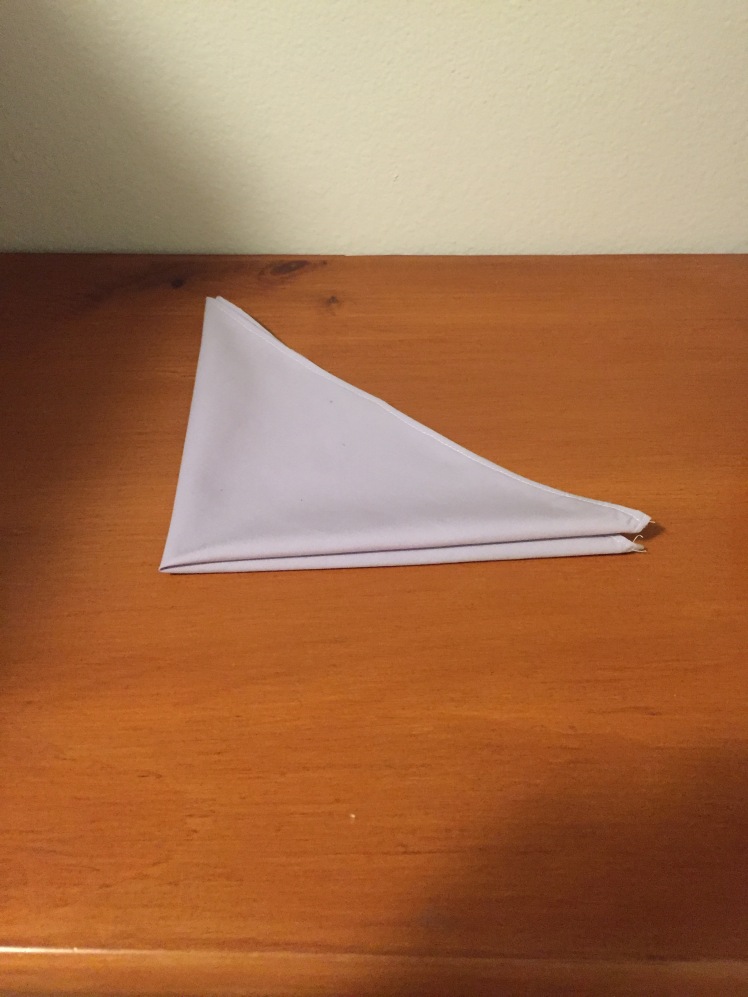 4. Fold the corner over, so that the corner with the two creases is flat on top.

5. Pull the lower corner, so that it creates some separation between the two.

6. Pull them until it creates two creases, but keep the top aligned if possible. 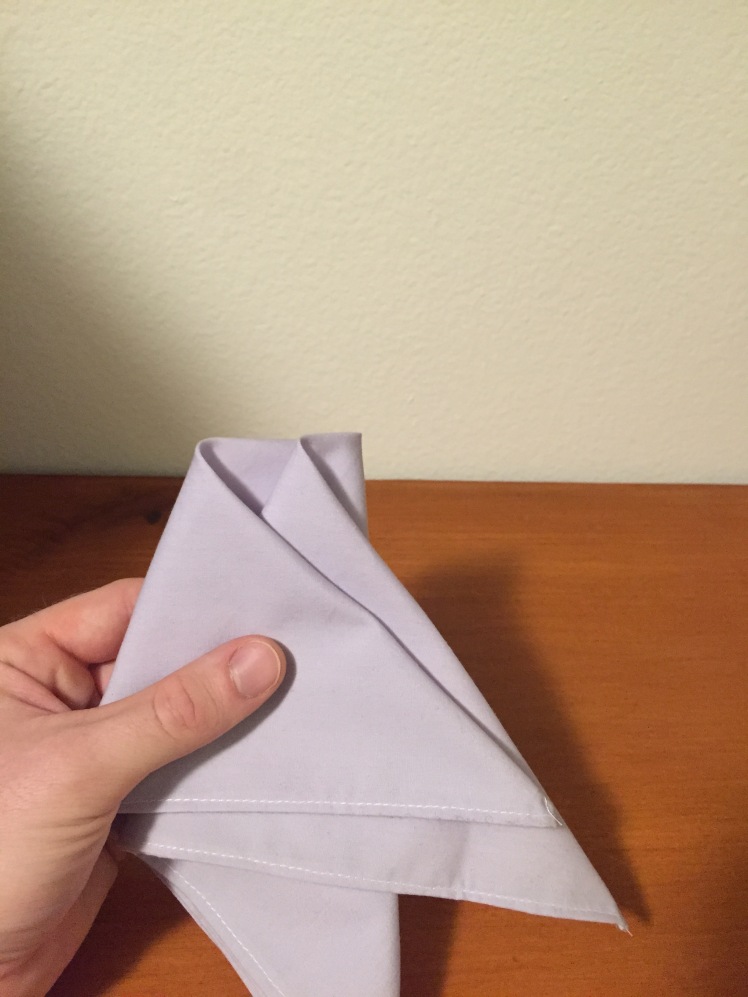 8. Fold the bottom under.

9. Place in your pocket and viola!