Dandy – A man “[n]ot afraid of the odd, the outré, and even the pastel, he also does not fear the effeminacy associated with the dandy’s art.” – h/t Slate

As I have gotten more and more into style and fashion, the archetype that I tend to gravitate towards is the Dandy. This is by far not the only archetype of style, and not the only one that I channel, but it’s the one that I tend to gravitate towards. As stated a dandy is one who is not afraid to play with gender roles, and wear patterns and fabrics usually reserved for the gentler sex. For me, personally, I have allowed this to extend into the scents I wear as well. But choosing a cologne or fragrance is a topic for another time.

The point is there are a number of archetypes that a man can channel in the fashion world. The dandy as discussed. Another of my favorites is the woodsman or lumberjack, clad in flannel and boots. Lumbersexual is a real thing.

There’s the American Bad Boy, as perfectly embodied by James Dean in Rebel Without a Cause. The red blouson jacket, undone just so, to show his undershirt, paired with some classic american denim. The ambivalence with which it it worn is simply so…cool.

There are countless men, throughout history, who seem to embody style, or an archetype for their generation. Which brings me to something I saw yesterday. GQ published their list of the 20 Most Stylish Men in the world. The list is available on their site, and is apparently (kind of) scientific.

So, first, George Clooney was excluded from the list, and apparently me and everyone else under 30 doesn’t find him that particularly stylish. And I got in a disagreement about the stylishness of Mr. Clooney. The argument goes that his is a classic style. The embodiment of old Hollywood. And nothing against George, but as well as he rocks a Tuxedo, I don’t look to him as a particular icon. Just being handsome alone, doesn’t quite do it.

There are a few highlights on the list, and agreements and disagreements. There’s a part of me that wonders whether Ryan Gosling is just really, really, really good looking, like a younger George Clooney. So, really, anything he wears just looks good. Also, I feel like excluding Andre 3000 from the list is damn near criminal. To me, that man just oozes style.

But overall, the point being made, is that these men are ones that drive forward fashion (or supposedly so) because of their influence and fame. And therefore are deserving of prominence in the contemporary style zeitgeist. But, if you are looking for guidance, like Andre 3000 says – Emulate, Don’t Imitate Your Icons.

So, as you’re going through the journey of finding your style, you should have someone (or an archetype) who’s style you really admire. In fact, it’s almost necessary. But don’t try to imitate them to the point of fetishism. That’s just weird and creepy.

Find and archetype, or style icon, and channel them.  Figure out what they’re driving at in their fashion, and make that your own. Switch it up, and change who and what you’re channeling, or combine them and go ahead and be a dandy lumberjack. Wear a paisley pocket square with a wooden tie if you feel like it.

Today’s fold is a Four Point Fold, which is a fairly formal, and more time consuming fold. For this I would reccomend a large pocket square, and either silk, or a well worn cotton. It can be formal if ironed or pressed, but also can take on a more casual air depending on the pattern and fabric of the square, and whether you decide to iron or press it.

1. Start with a large square.

3. Then fold in half diagonally again. 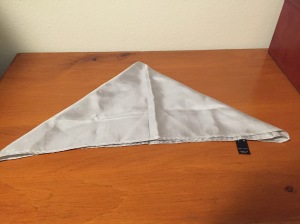 4. Then fold in half diagonally one more time. 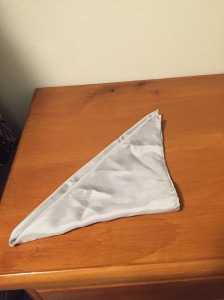 5. From there, pull apart the four tips of fabric at the top of the fold to make your four peaks. This would be a good time to press the square if you want a clean crisp look. 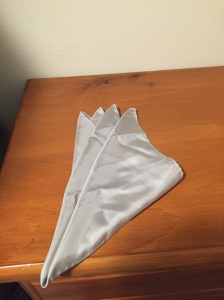 6. Then fold the perpendicular point in, holding it there.

7. Then fold the bottom up and over the fold in to lock in the fold and prepare it for your pocket.

8. Insert into your pocket and fluff. If you don’t press your square it will require a bit more care and arrangement once it’s placed into your pocket. However, you can also arrange it more loosely for a more casual look. 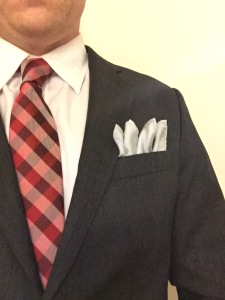 There you have it. More to come tomorrow, and don’t be afraid to send whatever thoughts you have to me at seamus@smkstyle,com.

One thought on “On Archetypes and Icons: Pocket Squares, Four Point Fold, Day 6”