I have talked a lot about rules on this blog. About icons of style, and things to do, and not to do. How to wear a suit, how to match socks and accessories, colors, patterns, fit, and a whole host of other things. Rules essentially. Guidelines on how to dress.

I have also talked about finding a persons voice through style and expression. About taking an internal beat of a drum only you can her and turning it outward.  Through style of dress. About finding confidence and wearing whatever you want.

It seems like these things are contradictory, but in reality they are not.

There’s a saying that rules were meant to be broken. And part of the point of learning the rules is figuring out how to do that. Once you have the basics of style down you can flaunt the rules, or out and out break them. Maybe you WANT to look like an NFL anchor and have an entirely monochromatic outfit where your tie, pocket square, socks, and shirt all match. Sometimes, that can be a good look. Or you want to rock the Canadian tuxedo (denim on denim), or navy and black, or brown and black, at the same time. What all of this means is that you’re essentially calling your own shots. You are expressing freedom.

And on the 4th of July, what could be better than that? In 1776, America declared itself free from its colonial overlords, and in 2015 and beyond, men should consider themselves free from overly stifling style rules. Just…don’t go too crazy with it and lose your head. Because that was the French Revolution.

Today’s fold is a 5 point fold. Ridiculous? Absurd? Sure, but the american flag has stars on it. Those stars have five points. Therefore, this fold is going to have five points too. Like a little star in your pocket.

3. Fold in half diagonally again.

4. Take the corner on the side of the last diagonal fold, and fold over the top to the point. 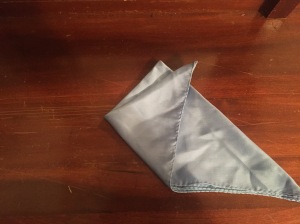 5. Pull apart the two points or pieces of fabric. 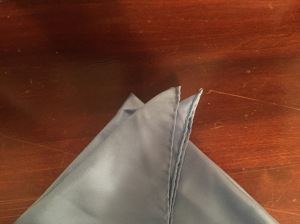 6. Take the opposite corner, which should already have easily separable points, and fold that over the top. You should now have the five points. 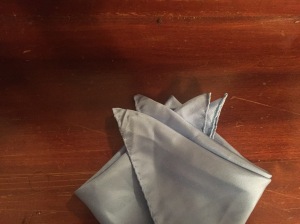 7. Tuck in the sides and fold up the bottom. 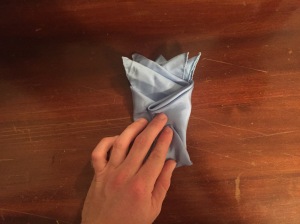 8. Place into pocket and arrange. This one may require some arranging as it is a more complicated fold.

There you have it. A five point fold. This one, I would probably recommend attempting to use an iron once you have the points, in order to press them out and make them even if possible. Questions, Comments: seamus@smkstyle.com