Life is about navigating a series of “can”s and “should”s. There are many, many things you can do. Whether you should or not, is another question entirely. There are some basics that you pick up in youth. Can you touch the hot stove? Yes. Should you? No, definitely not. It continues on throughout life. You certainly can go an hit on your recently divorced bosses new supermodel girlfriend, but you probably shouldn’t. Unless you just won the lottery and you’re looking to start a legend that will one day be written about in a folk song. And in that scenario, you probably should go tell Yvanka that you’re actually Batman, and she needs to come with you right now because her life is in danger.

Many times I stand before a piece of clothing in a store, or while considering an outfit in my closet, and I think to myself: “I can pull this off, but should I?” A few weeks ago I had gotten a brand new denim jacket, and I thought…Canadian Tuxedo? I knew I could do it. I had the cajones to walk outside in mostly denim and look a man in the eye as if to say: “You mean to tell me there’s no Tim Horton’s around these parts?” And so off I went, fully indigo dyed, and ready to wreak havoc on any white couch I came upon.

But there’s one accessory that I am constantly asking myself the question of can, and should. The neckerchief, ascot and cravat. The wearing of a piece of fabric about the neck under my shirt, rather than over my collar, is a bold move. You’re not joking around with an ascot. You’re basically making a stand. The situation doesn’t call for a tie, but you feel a deep seeded need to accessorize your otherwise casual outfit. Once you cross this holy line of demarcation there is no going back. You have crossed the threshold into the land of the thoroughly aesthetic. You will never again be able to claim that you do not care what you look like. You now have to look in the mirror before you leave the house.

Difference Between a Neckercheif, Ascot, and Cravat

Neckerchiefs were originally what can be thought of as a bandana, and are worn by cowboys, boy scouts, and sailors. Generally, a large square cotton piece of fabric worn around the neck to protect from sun and dust.

However, in contemporary fashion they more often are smaller, worn below the collar and appear more like this:

The distinction comes generally in where the knot is worn. As you can see for the neckerchief, the fabric is generally tied together, and worn below the collar, with the knot showing. It can also be worn to the side as well, or to the back, to create more of a look of an ascot. Some neckerchiefs are worn over the collar, such as those in the Navy standard issue sailors uniforms.

What about Cravats and Ascots, and their distinction. These accessories may have had a distinction at one time, but unless you really want to get technical, there is little distinction today. Originally, formal cravats were worn about the neck and secured with a pin. Think of those frilly things from the 1700’s. Also, at one time, all men’s neckwear could be referred to as a Cravat. “Cravate” being the french word for tie. Day Cravats, which are also generally known as Ascots, were simply broad strips of silk tied loosely and worn under a shirt on the skin. All Ascots are Cravats, but not all Cravats are Ascots.

The question of “can and should” this article is interested in refers to Day Cravats, or Ascots. There’s a brand that specializes in Cravat’s out of england called Cravat Club. But again, these could just as easily be Ascots. The image below shows one of their Cravats.

Can you wear one? Should you?

Like I said, you can do whatever you want. But wearing an Ascot is a 400 level class. If you just bought your first suit, and you’re thinking that maybe you’re ready for this, be careful. You run the risk of looking foppish, or pretentious. But some men look great in Ascots. Liek Cary Grant.

But Cary Grant could probably pull off a garbage bag. There are other men that look unbearably pretentious. Or just like they’re trying too hard.  Even Brad Pitt struggles with an Ascot. Or maybe it’s just the pouty face. So, before you go ahead buy a brand new Ascot for your party, keep in mind, you’re playing a dangerous game. But play it if you think you can. Me, I’ll be there with you. Sometimes. But not all the time. Because sometimes, just because you can do something, doesn’t mean you should.

Today’s fold is a modification of the winged puff fold that yields an interesting three points. 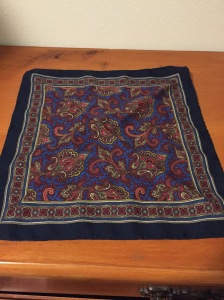 3. Fold the corners down, as if you are making a winged puff fold.

4. Fold the tip towards the top of the fold. 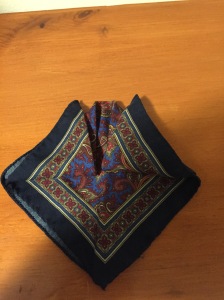 6. Fold the corner in in order to tuck in the point that is made.

7. Repeat for the other side, then fold up the bottom.

8. There you have it. Adjust the points and pull up as needed. 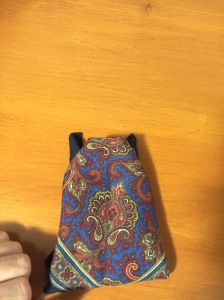 9. Place into your pocket and arrange. I think it creates a better appearance than a simple two point puff fold, as the midd is in essence also a softer peak, but a peak nonetheless.

Questions? Comments? Need help pulling off an Ascot? Shoot me an email: seamus@smkstyle.com